Keeping up With the Latest K-Beauty Trends 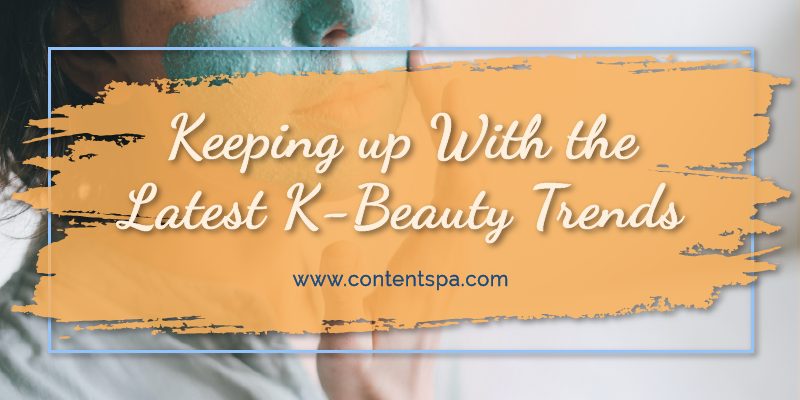 In recent years, Korea has influenced the masses with its beauty trends just as much as the Kardashian-Jenners have.

Whether in pop culture or on the skincare and beauty regimen with their elaborate skincare routines, the Korean influence is widespread and much appreciated.

In this article, we will divulge into the world of Korean Beauty trends, dissect their influence over customers around the world, and present you with all the aspects of the much loved Korean beauty hype.

Watch this video first to get a better understanding about the latest Korean beauty trends. It just might be your calling!

Beauty is said to lie in the eyes of the beholder. But a point to be noted is that if the beholder lies in a particular geographic location, then their version of beauty will be slightly different from their cultural counterparts.

For example, while a classic red lip is a classic beauty trend for the French, it can be considered too bold and brash in certain other cultures. Similarly, the dewy Korean look might be considered “too plain” to some.

The bottom line is, beauty is subjective, and rather than trying to fit in on a specific “beauty archetype,” one should practice whatever methods suit them the best (skin/ location/ occasion and budget-wise) and venture into anything that their heart desires.

K-Beauty Trends Back Then – A Brief History

The Korean beauty industry is said to be almost a decade ahead compared to the rest of the world. For instance, sheet masks credited to the dewy Korean glow have long been incorporated in the Korean skincare routine.

The famous era of The Three Kingdoms (the three rival kingdoms of Goguryeo, Baekje, and Silla) is often held responsible for igniting skincare in Korea, starting with facial scrubs and eyebrow ink, which is the modern-day equivalent of eyebrow fillers.

However, in 1961, when foreign products were banned in Korea, K-beauty started gaining popularity locally and eventually dominated the beauty industry worldwide.

What Are the Current Trends?

The unusual ingredients and practices might raise some eyebrows, but one look at the Korean idols is all it takes to try your hands on them.

Besides introducing such unorthodox beauty treatments to the world, Koreans are also known practitioners of sustainable and cruelty-free products.

Beauty is subjective and as mentioned before, lies in the eye of the beholders. There are certain things that the beholders of South Korea prefer, their perception of beauty being slim lithe figure, flawless skin, small face, V-shaped dainty facial features, dewy skin, pale skin, small lips, and straight eyebrows.

South Koreans, like all other countries and cultures, have a set beauty standard (double eyelid, V-shaped nose, pert nose) that plays a large part in the popularity of plastic surgery.

Unsurprisingly, Koreans are open to plastic surgery to such an extent that it is the new norm. Those that opt for surgery aren’t ridiculed, shunned, shamed, or ostracised, and a part of this can be credited to the open admission of the revered Korean idols for going under the knife. The most common procedures include eyelid surgery, rhinoplasty, and jaw reduction.

The Hype That Is Korean Skincare!

Skincare is a part of the Korean lifestyle. Koreans start the best-suited skincare routine from an early age – a lesson to be learned for those that don’t particularly care about having a routine or think it is a waste of their time.

As the extensive beauty routine has gained worldwide popularity, curiosity from those who have never heard of it is getting more prevalent. Inevitably, this curiosity can cause people- from newfound skincare disciples to those who just want to do a little soul searching, to ask, “What is the Korean 10-step skincare routine?”

It all starts out with an oil cleanser or a cleansing balm to clean, and soothe your face and figuratively wipe the slate clean.

While the previously-mentioned oil cleanser is useful for removing dirt and the previous day’s makeup, step two of the routine is a foaming cleanser to target any residual oils.

Step three will have you exfoliating to dig deep in your pores and remove any excess skin that is holding you back from your maximum smoothness. Step four calls for a toner to maintain the moisture and the pH balance of your skin.

The next step is applying essence that will hydrate the skin and aid in cell turnover. After this step, it is time for any of the serums, boosters, skin perfectors that directly treat the problem areas.

Step seven calls for a face mask that will hydrate and infuse the skin with essence concentrate. The eighth is an application of eye cream, which minimizes puffiness, dark circles, and crow’s feet.

Step nine is a moisturizer to lock in the moisture, and the final step is an effective sunscreen (but that’s not necessary if you are going to bed).

The 10 step routine may sound laborious in theory but has been loved by the practitioners that have been befitted with flawless, glowing, and healthy skin.

However, there has also been a recent reset on the 10 step skincare routine to a focused routine against skin microbiomes, i.e., bacteria that live on the skin.

The “no-makeup makeup look” can be traced back to and is very prevalent among the actors of K- Drama as almost all of them look “natural” on camera. Korean makeup comprises a natural dewy look and relies heavily on the texture of the skin that has been carefully taken care of than additional and layered makeup.

Think of it as painting a canvas; if the quality of the canvas is good, the paint goes off seamlessly, and a little goes a long way, but if the canvas is marred with bumps and rough patches then, the paint has to be excessive and layered to cover it up.

A proper skincare routine makes sure your face is healthy and gives you a pretty canvas to play with your makeup. While the Koreans keep their makeup simple and neutral, they occasionally glam up their look with the rhinestone eye makeup: a simple application of rhinestone on a daily look will tremendously upgrade the makeup.

The Influence of Idols on the K-Beauty Trends

The 21st century has been globally dominated by the ‘Korean wave’, a term first adopted by the Chinese media to refer to the popularity and success of South Korean culture in China.

Even the government supports the popularity of the Korean culture and influence, so much so that in 2014, they allocated 1% of their budget and raised about $1 billion to nurture and hone in the popular culture.

Celebrities play a massive role in the lifestyle of people in Korea (and beyond). They are idolized and have garnered a loyal following from both national and international audiences.

The internet and viral videos by artists such as Blackpink and BTS have been received with so much love globally that DJs around the world are no longer reluctant to play songs of other languages. In 2016 alone, Korean music videos were watched 24 billion times, 80% of which were global viewers.

The Popularity of Skincare and Makeup Among Korean Men

All skin needs care, and no skin is exempt from doing fine without the proper care it needs. Korean men are just as much into skincare and are makeup enthusiasts like their counterparts of other genders.

Makeup, men, and toxic masculinity make a dreaded combination, while the first two are completely normal and no different than makeup on women; the latter presents a skewed and rather oppressive view that discourages men from caring for their appearance.

Toxic masculinity is so unhinged that it had to make up a word – metrosexual, just to classify men who like taking care of themselves.

Korea is much more fluid and accepting when it comes to men doing whatever they want to. While men wearing makeup, jewelry, or any “feminine” colors are considered queer to most of the world, in Korea, it is no different from women doing the same. K-pop stars can be thanked for their style, which encourages men all over to express themselves.

Now that you are cognizant of Korean culture’s influence and popularity, you might want to expand the target audience of your brand to Korea.

Seventy-five million people worldwide speak Korean; thus, creating a localized beauty content for the Korean market might be an exploration-worthy avenue for your business, especially in an age where shipping is so easy and efficient.

In simple words, content localization means creating your content according to the style, language, and norm of your targeted location for an equally targeted audience.

Expand your beauty, skincare, and fashion knowledge by following our blog, comment your suggestions, and subscribe to our newsletter for more insights into the world of beauty, cosmetics, and fashion.

How did you like May Thawdar Oo’s blog post “Keeping up With the Latest K-Beauty Trends”? Let us know in the comments if you have anything to add, have another content idea for beauty content marketing blog posts, or just want to say “hello.” 🙂