Iconic Collaborations Between Fashion Brands and the Esports Industry

You are here:
Fashion Industry InsightsMarketing 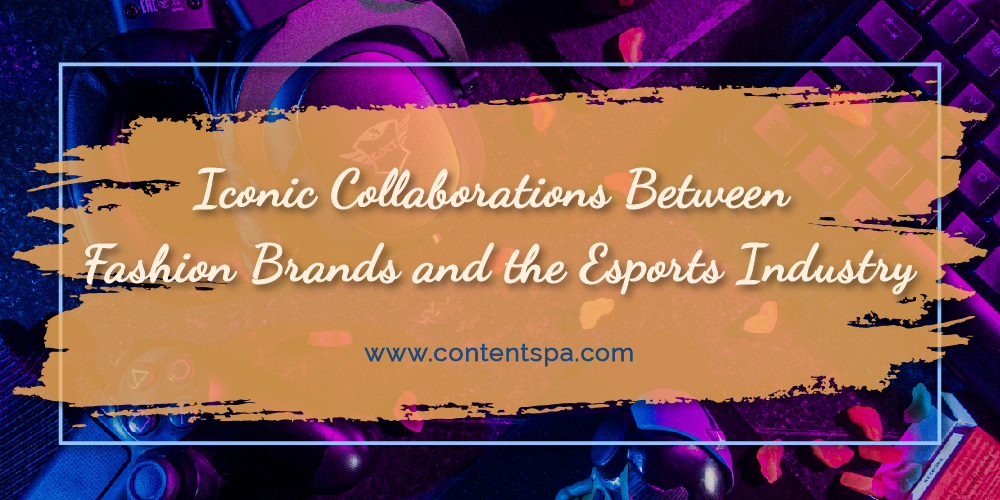 If Dickens were still alive, he would agree that 2020 was the worst of times and the best of times!

Worst because of the obvious pandemic, and best because of some of the most innovative, technological advancements, and the culture reset that we’ve discovered and experienced while being forced inside our homes.

For the first time, probably since Dickens’s time, the Earth can finally breathe: a myriad of home businesses debuted, computers replaced the commute to work, and a worldwide hype of gaming and esports bloomed.

After all, there is so much one can do while staying home all day. And during this period of staying home and gaming, something else took off: Fashion.

First, this just started with trying to bring a sense of normalcy while staying inside of the house by dressing up and putting on some makeup. And now, fashion has become an integral part of staying home and working or gaming!

But as the title of this blog suggests, we will be focusing on the relationship between fashion and gaming and the marketing strategies for fashion brands to collaborate with gamers and vice versa.

(Comment if you’d like to see a blog on the fashion of 2020, the impact of the pandemic).

Here is a short video for those who want to see an overview of this topic first:

The Popularity of Esports and Gaming

Gaming is one of those things that always have a following, a subculture, if you will. But it has found a new worldwide following and interest in the past year or so.

Throughout the global pandemic that we are in the midst of, nearly everyone has been told to stay home. This led to individuals getting more exposure to new hobbies, one of which being video gaming and esports.

The increase in the esports market has led other trend-conscious industries to increase their marketing approach to these newly developed markets.

One such industry is the fashion industry. Through the streaming of esports, these gamers are not just secluded at home but in the viewing glass of millions across the world.

There is an influence that an individual streamer may have on his followers, comparable to that of the fans of professional athletes who wear brands that they endorse.

This is when fashion-focused sponsorship in the esports industry comes in handy. These streamers can make merchandise partnered with one brand or simply be seen wearing that brand for his or her loyal fans.

Apart from these “in-person” displays, but companies like Marc Jacobs and Valentino have developed customizable branded merchandise in the hit game Animal Crossing. These gestures are a nod of mutual respect from the fashion industry to the gaming industry.

The analysis of the different markets in question also indicates that the large audience of esports is also the demographic that tends to have the most consumers: a younger crowd.

Fashion-Focused Sponsorship in the Esports Industry

Fashion brands have started recognizing the exposure their products can have (people literally pay to watch their favorite gamers play) and started investing in it by sponsoring gaming teams, collaborating with gamers, and designing special products for gamers and players.

Influencer marketing for the fashion industry has always been beneficial, provided you choose an influencer who matches your brand image to a T! Thus, many brands have sponsorships with different gamers and esports teams, one of the notable being Tyler “Ninja” Blevins and Adidas partnership.

Some brands have virtual apparel available on video games, and other brands design products for gamers with functionality in mind. For instance, K-Swiss debuted a pair of shoes that can be removed without the use of hands, keeping in mind that a gamer’s limbs would be occupied on a keyboard or controller.

This is a wise move when you look at it and draw parallels to the skating culture in the early 2000s considering that both subcultures are increasingly popular with the younger crowd.

A point to be noted is that many of the brands that are leading the charge with esports such as Supreme or A Bathing Ape all got their start with skaters.

Nike and Air Jordan are among the most widely revered brands of clothing and activewear across the world due to the dominance displayed by athletes who wear them on the court, field, diamond, or pitch. And these brands are now in an effort to grow and expand their market to esports.

The two have created an ode to esports in the form of the ever-popular Air Jordan 1 Zoom ‘Esports’: its dominant gray and black colors reflecting the lights and shadows of the League of Legends visual effects.

This move helped this young emerging market of esports to feel an allegiance and loyalty to Nike, an incredibly versatile company with global reach and popularity, and open the door to potential future partnerships.

The entire collection pops of silver and blue in honor of LoL champions. Real-life fashionistas may not be able to afford a $5000 LV leather jacket, but LoL characters can get an LV makeover at a little over $10.

They also allow gamers to see their main character wearing LV apparel, which increases the exposure of the brand and will hopefully lead to players buying the products that they see on the screen.

Partnerships between companies like Champion and Louis Vuitton are a wise move due to the diversity of the esports community (wide age range and good representation of women as well as men).

The subtle integration allows players the opportunity to dress their character in style as opposed to just blasting their logos everywhere.

Owning a business means figuring out new and popular avenues to integrate your brand with, and one such popular avenue, as you know by now is the realm of esports and gaming. If you have been a follower of our blog for a while, you have a basic knowledge of what marketing entails along with the first and foremost rule of marketing, which is to create value.

Instead of the regular Instagram influencers, by collaborating with gamers and esports players, you would be reaching out to an entirely new audience where wearing designer brands has become a status symbol of a “pro gamer”.

Given the popularity of the fashion and esports industry collaborations, many other fashion brands like Burberry, Gucci, Marc Jacobs, and Valentino have also started infiltrating the gaming industry with their own personal style.

An example of this is the latest hoodie collection of American Eagle where they have introduced a special “PlayStation inspired collection” and employed popular gamer Preston as an influencer.

The merger of fashion and gaming isn’t new. There have always been sporadic collaborations of fashion brands with gamers and players (just imagine all the sportswear and shoes. But now this collaboration has expanded to esports and gaming.)

This partnership strategy has proven to be so fruitful that even technology companies have started collaborating with popular games and professional esports players (Oppo X League of Legends, Samsung X T1). Fashion-focused sponsorship in the esports industry is at an all-time high.

A fashion brand and esports partnership has proven to be beneficial as it provides exposure to a novel potential customer base.

Since all the examples we have covered so far are of high fashion brands and very popular games, does it mean that such collaboration is limited to just big brands and companies? Absolutely not!

For example, if you are a small fashion brand, one way you can dive into the gaming and esports industry is by collaborating with a relatively smaller gaming influencer (micro influencing all the way!) or by designing special edition Claw socks that are always a hit and won’t cost much in production.

To make your gaming research a bit easier for you, here are the top 10 games of 2020 according to TIME magazine:

6. Ori and the Will of the Wisps

Given that gamers are being paid thousands of dollars to promote a fashion line or become brand ambassadors, perhaps the next avenue for your brand is partnering up with a gamer as Influencer marketing for the fashion industry has rarely gone amiss.

For a gaming or esports company foraying into the fashion industry is perhaps easier with YouTube sponsorships to multiple smaller channels and social media influencers.

This is an opportunity to introduce their game (and hopefully recruit more players/ gamers) into the ‘never-going-out-of-relevance’ world of fashion.

How did you like May Thawdar Oo’s blog post “Iconic Collaborations Between Fashion Brands and the Esports Industry”? Let us know in the comments if you have anything to add, have another content idea for beauty content marketing blog posts, or just want to say “hello.” 🙂

Being a true marketing guy, Sebastian will assist our specialists with his knowledge. Coming from a marketing and linguistics perspective, his blog posts will keep you updated with the latest news to boost your beauty business. Having lived in different English speaking countries he is switching between American and British English with the occasional Aussie word. Please go easy on him.