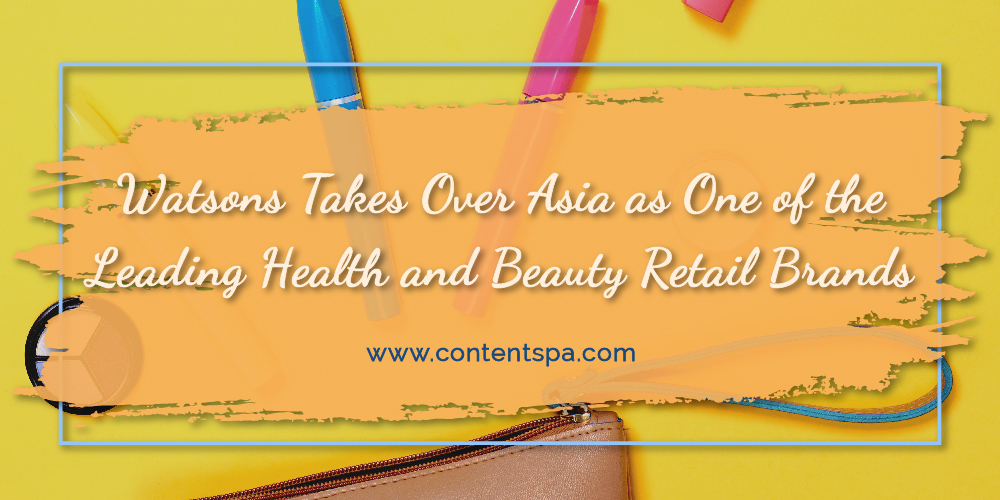 If you have traveled to China and some parts of Asia, you may have likely seen or possibly shopped at one of the many Watsons retail stores for some medicine, cosmetics, or personal care products.

Watsons is one of the most successful retail brands in the health and beauty industry, reaching consumers even in Europe and the Middle East. Despite having been around for years, the brand is still one of the companies that most businesses aspire to be.

For those who’d like to get an overview of this topic, we recommend watching the video first:

Now, let’s take a look at some of Watsons’ effective marketing strategies that help the brand stay on top of its game.

Watsons’ Story: How It Started

The Watsons brand you many know today did not start out as a beauty and health retail brand. In fact, its roots stemmed from a small business called The Hong Kong Dispensary.

As the name suggests, it was founded in Hong Kong in 1841 and was the first drugstore in the country to sell western medicines to locals.

Seventeen years later, a British pharmacist named Dr. Alexander Skirving Watson joined as its manager, and his name became prominent with the company by 1862.

After erecting its first beverage factory in Hong Kong, the company soon expanded overseas to China and the Philippines. Along with this expansion are a pharmacy and a soft drink factory established in Manila.

By 1895, A.S. Watson operated 35 stores and produced about 300 dispensaries, toiletry and perfumery lines.

In 1987-88, it put up chain stores in Taiwan, Macau, and Singapore, then opened in Beijing, Malaysia, and Thailand around five years after.

However, its business and influence did not only circulate in Asia alone. In the year 2000, Watson & Company entered the European market by acquiring the Savers health and beauty retail chain in the UK, soon followed by many others.

Fast forward to 2021, now one of the leading health and beauty retail industry players in Asia, Watsons, celebrates its 180th anniversary this year. The company now owns over 15,000 stores across Asian, European, and Middle Eastern markets, with its global loyalty member count reaching a colossal 130 million!

What started as a simple dispensary turned out to be one of the most prominent players in Asia. It was ranked 25th in the top 100 China Brands in 2014 and the first pharmacy/drugstore brand in Asia to be among Asia’s Top 1,000 brands for six years straight.

Whereas many luxury brands have difficulties maintaining their status across different sectors in China’s territories, Watsons keeps strong and it continues to cover an extensive part of the country with its branches in approximately 380 cities.

As we continue to see today, the brand will not seem to halt its expansion anytime soon.

Watsons’ Expansion Continues: How It Is Going

How Watsons became a successful drugstore brand in Asia is mostly thanks to its new, plausible, and high-reaching strategies, which are materializing in rapid succession.

Through the years, it formed fruitful partnerships, joint-managed its stores with other prominent brands, incorporated new technology, and reformed its logistics – all in a vigorous effort to “smartify” its business as it adapts to ever-evolving trends and consumer behaviors.

The most significant contributor to its massive sales growth is its drugstores, primarily due to it being an important avenue in consumer health and personal care.

What is more astounding in the shared data is the recovery of its sales performance on the Chinese mainland. In 2015, the A.S. Watson Group saw a significant drop in its performance, with a decrease in sales revenue for the first time in 2016.

Luckily, the group was able to bounce back because of its flexible cost structuring in the Chinese market. Being the exclusive distributor of particular goods (most of which are beauty products), it could also maintain a 20% gross margin.

By the time the group announced its sales performance in 2018, the numbers showed impressive double-digit growth.

One of its ingenious recovery methods is the 130 million members, who are part of the successful loyalty points program. This program is responsible for 62% of the group’s revenue in the first half of 2018, and 34% of that revenue comes from the products sold exclusively by Watsons.

In the same year, 3,400 stores were opened in the mainland, and the company slowly expanded its market to middle and smaller cities in the rural and more inland areas, gaining even newer consumers.

As the first half of 2019 rolled in, Watsons China (an A.S. Watson Group subsidiary) reported revenue growth of 8% and the store numbers in China grew further by 9%.

This again proves that Watsons continues to be one of the more pertinent and go-to retail brands today.

Watsons as a Leader in Health and Beauty Industry

The A.S. Watson Group sees vast possibilities in the health and beauty industries, considering them to be its “high growth” categories in China and Asia.

Kantar World Panel supports these views, stating an increase of 13% and 17% FMCG growth rates for the Chinese beauty market’s skincare and makeup categories respectively, during 2018.

This market creates a bigger demand for colorful cosmetics and encourages product innovations, brand collaborations, and new store concepts (as seen and demonstrated below).

However, Ngai adds that the challenge is for brands and retailers to stay relevant, especially when it comes to product innovation, experience, and marketing communications.

Herein are several examples of how Watsons became a successful drugstore brand in Asia and continues to be a leading retailer in recent years.

Not one to take a break, also in 2018, the A.S. Watson Group opened a new concept store called CKC18.

It is an electronics retailer and a supermarket hybrid that holds the “Watsons Lab,” featuring unmanned cash registers that can identify next-generation RFID tags (Radio Frequency Identification tags) attached to the products with high accuracy.

As a customer, all they need to do is simply place their basket full of goods near the register, and it automatically processes their total payment.

Payments are facilitated with the Watsons App, which was developed further to detect customers coming in and out of stores, recommend products, and manage customer health.

Another noteworthy innovation is smart mirrors, which were created in partnership with YouCam Makeup from Perfect Corp.

These mirrors run an AR makeup app that allows consumers to virtually try on over 100 different types of cosmetics in a variety of colors.

This technology is so far available in its Shanghai, Taiwan, and Hong Kong stores.

The joint management with L’Oréal, one of the world’s largest cosmetics makers, was the catalyst for Colorlab by Watsons, a new and chic concept smart store in Shenzhen, China (and later branching out to 50 stores in Mainland China).

In its black and white motif, the store holds the latest cosmetics of many famous brands, including L’Oréal, Watsons’ original brand, and other brands from Japan, South Korea, America, and China. Customers can also try out the cosmetics using AR makeup smart mirrors.

In terms of product distribution, Watsons have reached out to many logistics companies, including CaiNiao (which is part of the Alibaba group), to offer a same-day delivery service.

As of 2018, customers can opt for a speedy two-hour delivery service in China’s major cities.

In a show of outstanding business acumen to stay on top of its consumers’ needs and behaviors in every region, A.S. Watson Group struck a deal with Unilever to analyze Watsons’ customer data. This data analysis keeps helping both groups to figure out which products are best suited to a particular region.

As societies, technology, and industries continue to modernize, there is no doubt that Watsons, along with other leading health and beauty retail industry players in Asia, will keep agile and responsive to respond to market changes.

Doing so is the way for it to continue to capitalize on the immense opportunities in the personal care product sector.

Watsons’ Winning Strategies in a Nutshell

As cited in Watsons’ progressive endeavors, the ones running the show keep themselves abreast of the latest marketing tactics for the beauty industry.

A look into these just might inspire the next entrepreneur or pharmacist in you to get a glimpse of Watson’s marketing strategies that you can follow and incorporate in your own business.

Watsons does not show a hint of slowing down anytime soon, given its knowledge of the target demographic: lower and middle classes. The latter group shows a steady increase in spending power and a budding enthusiasm for beauty and health products.

The group is also aware of how its consumers are conscious of a brand’s social purpose, taking their values and sustainability seriously.

In response, Watsons created “Do Good, Feel Great” initiatives. The most notable ones are putting bans on microplastics in all of its in-house cosmetics and personal care products and signing up for New Plastics Economy Global Commitment and the Roundtable on Sustainable Palm Oil.

It also helps that Watsons cover a large territory, with thousands upon thousands of stores in Mainland China alone – the country which holds the biggest population globally.

Establishing a Loyal Customer Base

Yet, it is never enough just to know who your brand’s audience is. Successful companies need to secure loyal clientele for repeat business.

Watsons created its own loyalty card membership, which allows customers to collect points and enjoy discounts. Millions are already in possession of this membership perk, with numbers still rising as the brand attracts 800,000 to one million members each month.

Apart from the loyalty card, the brand’s wide range of local and international products, through an assortment of promotions, and optimization of physical stores, localizing content for online channels, and hiring local beauty advisors, Watsons continuously improves its relations with its local customers.

Following are some of its noteworthy methods:

Watsons China even changed the product formulas as necessary to adapt to geographical differences and to satisfy the customer needs. (i.e., the products in northern China are designed to suit the dryer and colder weather).

Watsons have created several campaigns to improve customer wellness, such as the “Smile Inside Out” campaign, which raises awareness for mental health and wellbeing while encouraging customers and colleagues to embrace a positive lifestyle.

Elite VIP Members Program and the Watsons One Pass

The most loyal customers get additional perks, and Watsons One pass members enjoy cross-border shopping benefits at any Watsons store worldwide.

Understanding the Need for an Online Presence

As one of the “Top 100 Annual Weibo Influence Power” in 2013, Watsons understands early on the importance of social media.

Their channels have a high level of engagement, often posting promotional content on their Weibo account. Furthermore, they use today’s O2O (Online to offline) development featuring QR codes on their online posts.

Aside from social media, there are official online stores on renowned e-commerce platforms like Amazon, Lazada, and JD.com to reach a broader audience.

To Wrap It Up

The secret for any business to stay relevant in a society of fast-changing consumer behavior lies in creating a meaningful brand for its customers. Watsons focuses on its demographic’s needs while scaling its businesses physically and digitally to reach a wider network.

If you wish to establish your business, get your hands on the latest content marketing tactics for the beauty industry from an agency like Content Spa that knows this industry best.

How did you like May Thawdar Oo’s blog post “Watsons Takes Over Asia as One of the Leading Health and Beauty Retail Brands”? Let us know in the comments if you have anything to add, have another content idea for beauty content marketing blog posts, or just want to say “hello.” 🙂