You are here:
Beauty Marketing 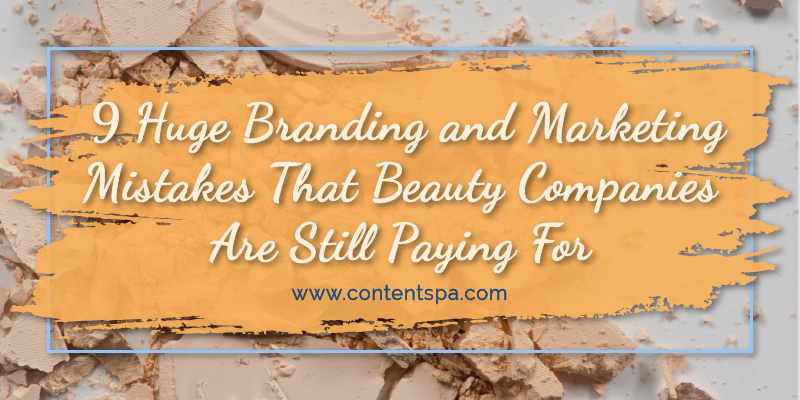 In 2019, it is more important than ever for companies to make sure that their branding and marketing strategies not only include everyone but don’t offend anybody in the process. While ideas thrown around in the boardroom can sound great, sometimes it doesn’t go over so well when it’s shared with the public. Being tone-deaf when it comes to race, inclusion, people’s appearances and their feelings have cost many companies thousands, if not, millions of dollars and we have a few examples of how those companies did just that.

These beauty brands failed to make people happy when they body-shamed, neglected, insulted and made fun of their consumers. They each got in trouble for their actions and some are still suffering because of it today. Here are some of the worst beauty branding and marketing mistakes in recent history.

In January of 2018, Estee Lauder sent a very clear message to the world as to who their customers were, when they released their new line of foundation which was called the “Double Wear Nude Water Fresh Makeup SPF25.” The line, which had 30 shades, had maybe eight that could be used by people of color.

The backlash was swift, but an apology was never given.

Gerard Cosmetics’ owner, Jen Gerard, got into some hot water when YouTube beauty guru Manny MUA posted their conversation on his social media. In the video, viewers could hear Jen calling another YouTuber by the name of Karina Kaboom, “the ugliest person ever,” all because she gave the company a bad review.

(P.S. Please put on your headphones to hear what Jennifer Gerad said at the end of this short video.)

Gerard even went as far as asking other beauty companies not to work with Karina. Well, her strategy failed. Instead, Jaclyn Hill, a beauty sensation with almost six million followers backed out of a deal to create a line with Gerard Cosmetics.

2017 was a difficult year for Nivea. They created a tone-deaf advertisement for one of their deodorants which used the words “Keep it clean, keep it bright. Don’t let anything ruin it. White is purity.”

At first, people were shocked, but it quickly turned into anger and Nivea was soon named “the official antiperspirant of the AltRight.” An apology was issued in which Nivea said that the advertisement and campaign were not what the company stood for.

If you were on Twitter back in 2015, you’ll remember that there was a particular fat-shaming hashtag that was trending at the time. Benefit Cosmetics, whose motto is “laughter is the best cosmetic…so grin and wear it,” decided to laugh at and jump onto the wrong train when they added their thoughts or might we say, suggestions, to the #MakeAMovieAFatty movement.

Instead of “Magic Mike,” they suggested “Massive Mike.” Instead of the “Fast and Furious,” they gave us “Fat and Furious.” They continued with “Legally Bulge,” “13 Going on 30 Stone” and “50 Stones of Grey.”

Fans of all shapes and sizes were outraged and Benefit first played it off, saying “Lovely Benebabes. We always get involved in hashtags that are trending. We are not poking fun at anybody.” But they released an official apology when the scandal gathered more steam.

ColourPop has a great reputation for being extremely affordable but they made a major fumble when the names of some of their Sculpting Stick concealers were released. You see, their darkest shades got names that African Americans did not appreciate; names like “Yikes” and “Typo.”

People were very upset, and the black community was encouraged to not buy from ColourPop. They apologized, saying “On behalf of ColourPop, we are sorry and are extremely grateful for our customers’ feedback. We have taken immediate action to change the shade names and review our naming process to ensure this does not happen again.” The two shades’ new names were “Platonic” and “Bloom.”

The goal of companies that sell products is to, well, sell products. When people are displeased or have concerns, the worst thing one can do is to make fun of their financial capabilities. Well, Z Palette didn’t get the memo, and proceeded to do just that when they released their $85 lipstick de-potters.

Complaints from customers were met with Z Palette commenting things like “you’re in a dorm room. It may be a stretch for your budget” and “thank God we don’t need your money.” The company was boycotted on social media and was dropped by several websites because of this. They offered a disingenuous apology which was later deleted off their social media pages.

ATwitter user named Kimberley grabbed screenshots of Z Palette’s mean tweet replies and they have gone viral since then. Let’s take a look:

7. Dove’s View on Being Clean Versus Being Dirty

Dove is usually one of the few beauty companies who seem to get it right with their marketing moves, but they took a wrong turn in 2017 that ended up causing the biggest scandal the company has yet to see. The brand, who always includes women of different sizes and races was boycotted by the black community and people who saw their campaign as absurd. Here’s why.

There was an advertisement placed on social media that implied that a black woman, who was dirty had to use Dove. This was portrayed by showing said black woman removing her (dirty) brown shirt as if to show that she had used the product. The shirt, now white and clean, was shown on a white model.

The fallout was swift, and Dove issued an apology saying “an image we recently posted on Facebook missed the mark in representing women of color thoughtfully. We deeply regret the offense it caused.”

In 2016, Urban Decay released a wide range of eyeliners in different colors, which they called their “Razor Sharp collection.” The liners were advertised on a model’s wrist, with each color shown in a horizontal line. The end result was a series of lines that people viewed as a “glamorized form of self-harm,” especially with the name of the products.

The image was taken down immediately and they had this to say about the incident: “We swatch on the inner arm to show texture & shades. We didn’t intend to reference self-harm as the product is named Razor Sharp Eyeliner.”

We swatch on the inner arm to show texture & shades. We didn’t intend to reference self-harm as the product is named Razor Sharp Eyeliner.

If you’ve heard of the brand Tarte, then you’ll have no doubt heard about their famous and infamous Shape Tape Concealer. Based on the success of that product, they decided to create a Shape Tape Foundation. The collection, which was released in 2018, had 15 products, only three of which were usable by people of color.

Fans were very disappointed because the lighter shades came in a variation of colors and undertones, while the darker ones all had the same undertone. YouTube beauty influencers like Alyssa Ashley, Jackie Aina, and even Nikkie Tutorials let the company have it! To make things worse, there were also reports that those shades were also poorly formulated.

This is the condensed version of what they had to say: “It may be too little too late, but we can assure you this was not meant in any kind of malicious way…we made the decision to move forward before all the shades were ready to go… for those who feel alienated in our community, we want to personally apologize. We CAN and WILL DO BETTER.”

Three deeper shades were released shortly after, but it hardly appeased anyone.

Surely these companies have tried to fix their mistakes, but consumers should also be careful to make use of professional services which are culturally aware. The Content Spa is your one stop shop for all the beauty and cosmetics content and translations you’ll need.

Subscribe to our site to get updates and stay in the know.

How did you like Sebastian Scheplitz’s blog post “9 Huge Branding and Marketing Mistakes that Beauty Companies Are Still Paying For”? Let us know in the comments if you have anything to add, have another content idea for beauty content marketing blog posts, or just want to say “hello.” 🙂

Being a true marketing guy, Sebastian will assist our specialists with his knowledge. Coming from a marketing and linguistics perspective, his blog posts will keep you updated with the latest news to boost your beauty business. Having lived in different English speaking countries he is switching between American and British English with the occasional Aussie word. Please go easy on him.