Red Lipstick: A Symbol of Power and Liberation 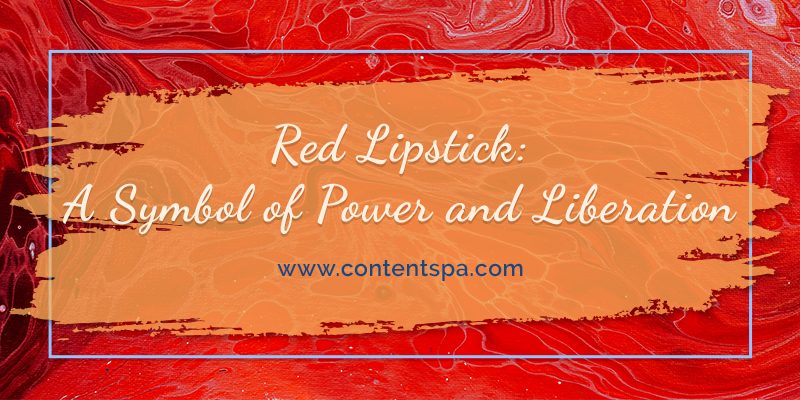 ‘Love,’ ‘Adventure,’ ‘Seduction,’ ‘Anger,’ ‘Passion,’ and ‘Danger’ are only some of the words that come to one’s mind when one thinks of the color RED.

This hue invokes a special memory in each of us and is undoubtedly one of the most popular colors throughout the world. However, whatever one’s association with the fiery hue may be, an irrefutable fact is that red is powerful; it is intense, and it is sensational. Red lipstick is the easiest way to channel all the power that the color embodies and is a beloved makeup staple amongst beauty enthusiasts.

What is the origin of red lipstick? And what does red lipstick symbolize? In this blog post, we take a trip to the past and learn about this beautiful hue and its significance in history. As a bonus, you will also find some interesting facts about the beautiful color throughout this article.

The History of Red Lipstick

Red lipstick is now one of the most integral items in a woman’s makeup bag. This modern beauty staple has a surprising and significant history charged with centuries of significance.

Many historians consider ancient Sumerians in 3500 BC southern Mesopotamia to be the first inventors of lipstick. Red rocks were crushed into a powder to tint the lips red.

Others like to credit the birth of red lipstick to the ancient Egyptian elites. Back then, Cleopatra was known to wear lip paint created using crushed insects mixed into waxes to create a red stain. It was a symbol of status for the wearers and an essential hook while marketing for women.

Ancient Greek lords, on the other hand, required prostitutes to wear red lipstick so men wouldn’t confuse them with Nobel women. In Asia, China was the first to create lip balms, and red was the most dominant color.

It is a shame that our curriculum excludes a more detailed history of red lipstick as it is a rather interesting one. In the dark ages in Europe, red lips marked their wearer as an incarnation of the devil.

However, later, it was popularized by Elizabeth I, queen of England  who loved the color and believed it had healing and protective properties (although we know that now to be quite the opposite since most lipsticks then were made of toxic substances.) Later, things changed in Britain again as Queen Victoria considered the color to be impolite.

Around the same time, however, in France, a full face of makeup along with lip rouge was often worn by women as a mark of good social standing.

In 1912 in the US, during the suffrage movement, women started to march to win equal voting rights while wearing red lipstick to gain more notoriety and attention to their cause.

Suffrage leaders Elizabeth Cady Stanton and Charlotte Perkins Gilman loved red lipstick for its ability to intimidate men, and protesters donned the bold color as a sign of rebellion and liberation. The bold and dauntless red was feminine yet daring and assertive. It became a symbol of strength.

As thousands of supporters of the suffrage movement marched past the New York salon of Elizabeth Arden, the cosmetics brand founder and an avid supporter of women’s rights, aligned herself with the cause by handing out tubes of bright red lipstick to the marching women.

After the suffragettes wore red lipstick, the flappers of the twenties also followed the trend, popularizing a painted lip to embody the idea of a “modern woman” in Europe and America.

💄 Fun Fact: The word “red” in Russian, krasnyj, is related to the word krasivyj, “beautiful”. So it’s not only the Red Square of Moscow but the Beautiful Square – krasnaya ploshad.

As women’s rights movements spread across Europe, New Zealand, and Australia, the solidarity between British and American organizers extended to their makeup. To show her solidarity during the march, British suffragette leader Emmeline Pankhurst often donned a red lip, helping spread the symbolic gesture among her fellow activists.

Similarly, during World War II, people in allied countries wore it as a sign of patriotism and a statement against fascism, as Adolf Hitler was one of the men who famously hated red lipstick.

Along with that, as men went off to war and women filled their professional roles back home, they donned red lips to enter the workforce. It showed their resilience in the face of conflict and offered a sense of normalcy in difficult times, allowing them to retain a sense of their self-identity from the time before the war.

At the same time, red lipstick even became mandatory for women joining the US army. ‘Montezuma Red’, an official makeup kit consisting of red lipstick, nail polish, and cream blush was exclusively made by Elizabeth Arden and issued for women in the military.

During this time, lipstick became the most used cosmetic because of how inexpensive it was. As more and more women joined the workforce, it became a symbol that women could afford to buy to enhance their beauty with their own dollars.

💄 Fun Fact: The red stripes on the United States Flag stand for hardiness and valor.

Despite all this, the insinuation that red lipstick could also be viewed as scandalous is still relevant today, especially for women of color, who were often left out of the suffragette movement.

So for black women, red lipstick is all about changing this narrative.

Red lipstick is seen even today as a political statement. In 2018, Nicaraguan men and women sported red lipstick and uploaded photos of themselves to social media to show their support for the release of anti-government protesters.

In Chile in 2019, almost 10,000 women took to the streets with black blindfolds and red lips to denounce sexual violence in the country.

In Portugal in 2021, Portuguese politicians and citizens took to social media posting images of themselves wearing a bright red lip. The revolution was brought about after presidential candidate Andre Ventura insulted MP Marisa Matias for her red lips.

💄 Fun Fact: The most famous red “uniform” in the world is the one Santa Claus is wearing.

Women who wear red say that it emboldens them, and it has carried this connotation for centuries to this day. The ‘Iron Lady’ Margaret Thatcher, who served as prime minister of the United Kingdom, always sported a red lip, and now the US congresswoman Alexandria Ocasio-Cortez can also be noticed doing the same.

By wearing a red lip, you do more than boost your confidence. You essentially display a symbol of power embedded in the history of women’s rights.

The women’s movement was about women having choices, including how they looked and wore cosmetics. The choices in makeup available today enable people to express their preferences. It has become a mirror of what you believe for others to see, and red is the color of passion and strength.

It’s chic, elegant, and flattering, but it’s also so much more than that. It’s bold, defiant, undeniably feminine, and visually powerful; this messaging is the most common lipstick marketing strategy for hues such as red.

💄 Fun Fact: While the color red is considered to aggravate bulls in the Spanish arenas, this is actually a myth. Bulls can’t see colors because they are color-blind.

How did you like May Thawdar Oo’s blog post “Red Lipstick: A Symbol of Power and Liberation”? Let us know in the comments if you have anything to add, have another content idea for beauty content marketing blog posts, or just want to say “hello.” 🙂