Exploring the Hottest Makeup Trends of the 1980s 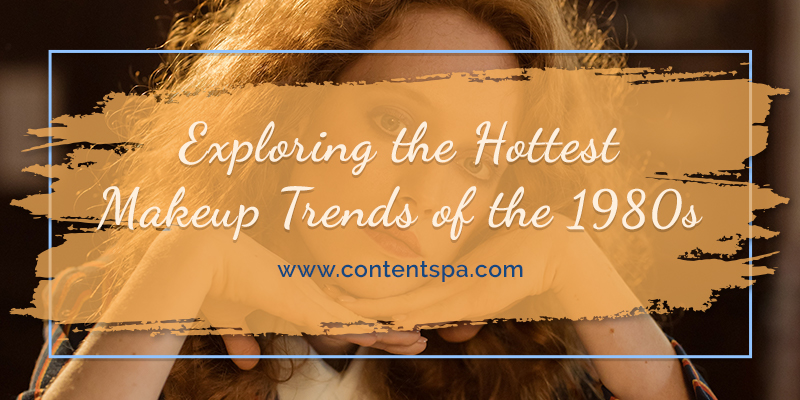 Oh, the 80s! When you had to decide whether your friends were romantics, goths, flat tops, b-boys, teddy boys, rockabillies, mods and rudies, skinheads, punks, heavy metallers, or psychedelics, and perms were an acceptable hairstyle. Ripped knees jeans and spandex, an ever-lasting love for musicals and John Travolta!

‘Nuff said already. The 80s was an era like no other. It was the best of times and the worst of times, but iconic, it surely was.

But, history does have a tendency to repeat itself, and sure enough, some of the hottest makeup trends of the 1980s are making a comeback in the 2020s.

Are perms making a comeback too? We can’t be too sure (and hopefully not coz’ none of us here have the face for it!). So, let’s take a trip down memory lane with us as we explore the 80s.

Which makeup trends were popular in the 80s?

The 80s makeup was anything but modest: save a few. The girls ‘painted’ on their faces, and every day was an occasion. Think Madonna and Cyndi Lauper.

If anyone knew how to turn heads and draw attention, it was these 80s icons!

Striking shades of eyeshadows, a prominent blush because just a little color on the cheeks was not quite enough, big bushy brows, and colored mascara: the 80s women were not afraid of experimenting and going all out with their makeup.

Here are some of the biggest makeup trends that people were going gaga over in the 80s.

Heavy foundation, which was a shade or two lighter (for God knows what reason), ruled the 80s. Layering was a huge deal, and packing on your foundation was the it-thing to do.

But it did seem to play out perfectly since the wearers now had an almost-white canvas to paint on some fun colors.

‘Subtle’ had no place in the New Wave and Synth era: if you had a blush, you slathered it on. No matter the skin tone you had, your cheeks would be the highlight of the face.

Most makeup enthusiasts preferred deep plum or bright pink, and they would usually blend it in with their eye shadows.

Bold blush is making a comeback as we speak, and while it isn’t as aggressive as the 80s were, a technique called ‘draping’ is creating quite a stir in the makeup industry.

Draping is when you apply the blush along the top of the cheekbones instead of on them. Makes sense?

A liquid or powder blush is blended with an angled brush towards the temples so that the face appears lifted and slimmer.

Another trend that has made a stellar comeback, thanks to stars such as Cara Delevigne, was bushy brows – a must-have in the 80s.

Models, singers, and actors were all showing off a thick, dark bushy brow that accentuated their bold eye shadows and colorful cheeks.

While it was a huge trend back then, sadly, it didn’t make it to the 1990s makeup history, and thick brows were replaced by the pencil-drawn-thin brows (and aren’t we all glad that it’s now in the past?)

Bright lids? Striking eye shadows? This iconic 80s makeup look idea was as unabashedly itself as the person who rocked it.

Sure there were many celebs who donned a brow-raising single color lid; many others chose two complementary hues to step out in style. One of them went on the top lid, and the other was blended seamlessly on the waterline.

Oh, a blue shadow was everyone’s ride-or-die: for every eyelid, there was a shade of blue with their names written on it.

Seeing women step out in colorful mascara was nothing to be surprised about. The 80s were all about fun and frivolity, after all. Women rocked false lashes and mascaras in every color of the rainbow and between.

The result? Eyes that held attention everywhere they looked. Makeup lovers would even apply one shade of color to their upper lashes and another to their lower ones.

If someone couldn’t see your lip shade from a distance, you were doing it wrong in the 80s. If there were a word to describe the lip trend back then, it would be ‘excess.’

To keep up with the trend, fashion mongers slathered on lip colors in all conceivable shades; bright red was an all-time classic, but pinks and magentas definitely stood out more. Blue-based pinks and bubble gum pink were famous among the younger fashionistas.

In recent years, most celebrities like to play it safe with their lips, but a few daring in-betweens take the road less traveled. Miss World Aishwarya Rai rocked a purple-colored hue to the Cannes Film Festival, and we haven’t stopped thinking about it since!

Frosted lips were a style statement, and metallic lip colors were the perfect addition to an already-loud makeup look. Too much was never enough.

Shiny lip colors were so hot; they found a way to make it to the 1990s makeup history too. Unsurprisingly enough, celebs today are saying goodbye to neutral hues and embracing this yesteryear trend in a big way!

Every girl in the 80s loved perms that were teased to perfection. Sure it took a few smelly hours at the salon to perfect this look, but indeed it was all worth it.

Hairspray was a makeup arsenal, and the curlier the look, the better.

The gorgeous Farrah Fawcett, one of the three television’s Charlie’s Angels, brought about the feathered look and had all women reaching for their hairdryers to achieve the same.

Hair was cut into layers and parted in the middle. Then, hairdryers and electric rollers paved the path to getting hair that flowed with the wind and gave major hair goals to every woman everywhere!

80s Celebrities and Their Iconic Looks

You can’t think of the 80s without thinking of Madonna. The absolute queen of fashion and music, Madonna, ruled the 80s charts and the audiences’ hearts.

Never one to shy away from public attention and the press, Madonna was often seen putting on foundation two shades lighter from her face, along with a bold blush on her cheeks and bold red lips.

While the lighter-than-your-skin-foundation is hopefully not making a comeback, celebs such as Meghan Markle are rocking a strong but subtle blush.

Brooke Shield was synonymous with bold brows and pastel shades on her face. With her piercing blue eyes and tanned skin tone, she created quite a buzz in the 80s.

Several celebrities have since embraced the soft, springy makeup look that Shields was iconic for. Celebs such as Megan Fox and Naomi Watts accentuate their eyes with a smokey purple shadow and add a peachy pink lip to achieve a breathtaking yet red-carpet-ready look.

An actor and a fitness icon, Jane Fonda embodied the 80s style with her big hair, muscular arms, and spandex! She was often seen with a frosted lip, a trend she carries with her even today.

Many other actors who followed suit have embraced the frosted lip, too, with stars such as Priyanka Chopra and Lady Gaga donning on a metallic, albeit subtle lip color, on their red-carpet gala events.

Known for her role as Samantha in Sixteen Candles, Ringwald immortalized the feathered bangs look.

Her iconic bangs have never stopped being a style statement since, and celebs such as Academy Award winner Emma Stone, Drew Barrymore, and reality star Nicole Richie have been seen flaunting the cute-do.

Wrapping up the 80s Trends

The 80s was an era of more-is-more, with bright colors and over-the-top hairstyles. And a lot of this fun, carefree fashion style is having a significant resurgence in the 2020s.

Primary colors, blushing beauties, and electric blue eyeliners are just some of the makeup trends that today’s celebs are adopting once again, and we’re all for it.

While all of the 80s inspo may never see the light of the day in the 2020s, in the fashion world, there’s one thing we’ve learned: never say never.

Didn’t this article make you want to climb on a time machine and live in the daring 80s era? If you want even more insights on the fashion and beauty content marketing industry, follow our blog.

How did you like May Thawdar Oo’s blog post “Exploring the Hottest Makeup Trends of the 1980s”? Let us know in the comments if you have anything to add, have another content idea for beauty content marketing blog posts, or just want to say “hello.” 🙂

Red Lipstick: A Symbol of Power and Liberation
9 September 2021