What’s so Super About Superfoods?

You are here:
Health and WellnessMarketing 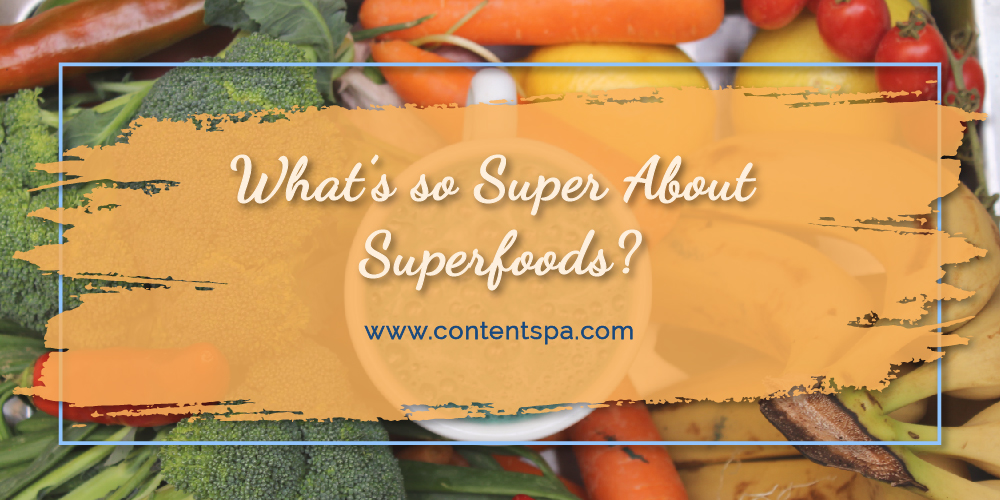 If there’s anything positive to have come out of the global pandemic, it’s the realization that our immune system needs to be in top-notch condition to ward off impending diseases. Healthy eating was a luxury in the fast-paced lifestyle that we were all so used to.

The recent epidemic has been a slap on every canned food lover, with health junkies clamoring, “I told you so.” And in good time, too, since junk food makes up 60 percent of calories in the typical American diet.

The answer to all your health woes? Superfoods! Short of wearing a cape, superfoods are every bit the prima donnas, reigning supreme over all the other ‘regular’ healthy food groups.

And a lot of that has to do with creative marketing strategies. This video will show you a glimpse of how they were done:

Sure, there have always been popular yo-yo diets and trends that people have sworn by, but their end goal was fat loss rather than fueling the body with all the right nutrients.

Now that most consumers are aware of the health risks associated with junk food, the era of superfoods is ever-growing. A recent study of the Superfoods Market by Products and Geography reports that the superfood market size is likely to grow by $244.68 billion (€205 billion) between 2020 and 2024. Out of all the food categories, superfruits have the most potential to drive sales.

Buckle up as we explore the truth behind superfood and how content marketers can cater to this ever-growing market.

Superfood: Is It Really Super?

We have all, at one time or another, heard of ‘superfood.’ The term, while quite catchy, boasts of ultra-healthy foods that help boost one’s health and overall well-being. Health blogs and enthusiasts frequently speak about this nutrient-dense food that helps stave off diseases and, much to people’s delight, aging! But is there any truth to these claims?

The origin of the term ‘superfood’ is dubious. Early records suggest that The United Fruit Company initiated the term as part of its marketing campaign to promote bananas.

Others suggest that the term was coined by an alternative medicine practitioner, Michael Van Straten, in the early 1990s. In his book, Superfoods, he revealed four essential foods that help build the body’s resistance to disease, stress, and infection. His ‘superfoods’ included simple food that we are all well aware of: fruits and vegetables, nuts, and whole grains.

Fast forward to the 21st century, after multiple endorsements by health practitioners and marketing geniuses, this term is now being used to explain expensive-than-usual foodstuff.

Food items harvested in exotic locations and lesser-known-about produce often make it to the superfood list, such as Goji Berries, which are native to China.

Outside of the marketing realm, though, the concept of superfoods is quite sketchy. So much so that the European Union banned the use of the term ‘superfood’ unless marketers could prove for certain, backed by scientific data, that their food was, indeed, super.

But, even with the lack of evidence, sales have not dropped but increased substantially over the years. According to the Mintel Global New Products Database, sales of ‘superfoods’ increased by over 200% between 2011 and 2015.

This isn’t to say that these foods are not ‘super’ at all! But there are other equally nutritious yet grossly underrated foods such as garlic, eggs, spinach, and broccoli that aren’t getting the attention they deserve.

What Foods Classify as a Superfood?

While there is no specific definition of how food goes from being ‘regular’ to ‘super,’ it is generally understood that nutrient powerhouses are loaded with antioxidants, phytochemicals, minerals, and vitamins.

The Mayo Clinic offers four components, out of which three have to be met for a food to make it to the superfood list 2021.

1. It has to be a good source of fiber, minerals, vitamins, and other nutrients.

2. It must be high in antioxidant compounds and phytonutrients.

3. It must help reduce the risk of heart illnesses and other diseases.

4. It must be readily available.

What Are the Top 10 Superfoods?

Here are the top 10 superfoods that make it to almost every list ever curated by health blogs:

What Are the Benefits of Superfoods?

The high mineral and vitamin content in superfoods can ward off illnesses by strengthening the immune system. Antioxidants help prevent cancer and healthy fats, while phytochemicals reduce the risk of heart illnesses.

They are also known to protect one’s organs from toxins while lowering cholesterol and reducing inflammation. So many benefits packed into one, it is unsurprising that more and more people are joining the superfood wagon.

Most superfood marketing campaigns make sure to list out ‘antioxidants’ as one of the numerous benefits of eating superfoods. But, maybe, the term has been exaggerated solely for the consumer’s purpose.

To put it simply, antioxidants are bodyguards that fight free radicals, which are linked to cell damage. Several kinds of research have been done on the benefits of ‘antioxidants’ and their positive effects on the human body.

However, most studies show that our bodies are perfectly capable of fighting the oxidative stress in our bodies. Meaning, superfoods do little to nothing to help fight free radicals, except maybe put a dent in one’s wallets.

With great marketing in place, the benefits of superfoods are highlighted and presented in a perfect package that leaves customers wanting more.

Here are some incredibly noteworthy campaigns run by superfood manufacturers that have helped them gain traction in the industry.

1. Campaigns Based on Research

Science-based marketing has been used as a tool for companies to create hype around their products. After all, health claims sell.

However, the FDA requires that these health claims are backed by sufficient evidence if marketers wish to specify it in their labels. This is why most companies go the extra distance and spend million on research looking for evidence to support their ‘superfood.’

For instance, Ocean Spray, a U.S. manufacturer of Cranberry products, pledged $10 million (€8.4 million)to study the positive effects of cranberries, including health claims that they are a cure for urinary tract infections.

Another great example of a research-based campaign is by Wholly® Guacamole. As we all know, guacamole is a staple in most kitchens, but it can be quite tricky to make since people are often unsure when to cut the avocados open.

Before launching the campaign, the brand conducted research that showed 38% of Americans could not use avocados to make guacamole, and 70% threw them away for being unripe. Wholly® Guacamole understood this conundrum and introduced their product with the help of an animated campaign.

Backed by marketing insights and the use of four characters showcasing the avocados’ personalities, it successfully created a campaign that helped consumers internalize their ‘All Real. No Drama’ slogan.

However, there have been instances in which marketers have ‘tweaked’ their research to do their bidding.  In 2015, the Royal Hawaiian Macadamia Nut presented an 81-page long petition to the FDA to allow it to endorse the use of macadamias as a superfood that reduces the risk of heart disease.

“Supportive but not conclusive research shows that eating 1.5 ounces per day of macadamia nuts, as part of a diet low in saturated fat and cholesterol and not resulting in increased intake of saturated fat or calories may reduce the risk of coronary heart disease.”

With these precise words in place, the plaintiff went, for lack of a better word, ‘nuts’ with its advertisements.

Street engagement campaigns are one of the best ways for health food companies to directly engage with customers and introduce their products to the public.

8Greens, an “all-green” dietary supplement brand, launched its campaign in the streets of New York; its street carts bearing pictures of green vegetables to demonstrate what their brand stands for visually, and the team handed out product samples to over 150,000 passers-by in eight weeks.

Wholly® Guacamole also launched a #GuacStop campaign, with a pop-up activation in five major cities of the U.S. The Guac Stop was attended by more than 260,000 people, and over 243,000 product samples were given away.

Another idea is to focus the campaign on one strength that individualizes your brand.

In its marketing campaign ‘Values Matter,’ Whole Foods Market emphasized where its produce comes from, giving consumers insights into the origins of the foodstuff found in their stores. The marketing campaign ran on TV and print media and was a huge success.

Surveys conducted after the ad run reported the brand awareness rose by three points, while 16% of consumers said they would consider shopping at Whole Foods.

The power of social media goes beyond one’s imaginations, helping create more brand value for global sellers. According to a study on Pinterest, the search for superfood powders spiked by over 144% in 2019 alone.

Tommy’s Superfoods is one such brand that reached out to more than one million people on social media after its campaign #ThinkVeggiesFirst. The campaign focused on teaching people to choose one from a list of superfood vegetables and include it in their daily diet.

A new avenue for marketers, TikTok has grown exponentially over the years. Taking advantage of its engagement, Kind Healthy Snacks launched the #KINDSimpleCrunchContest, encouraging people to use a ‘crunchy’ noise to make their unique clips. The hashtag has since been viewed over 65 million times.

Another practical-yet-efficient way to market superfoods is through recipes that actually use the products.

A big player in the superfoods market, Creative Nature, initially gained momentum by creating delicious and easy-to-follow recipes. By using social media to their advantage, the vegan-friendly health company expanded by over 68% in a year.

Several influencers advocate for healthy living, wellness, and superfoods and usually partner with other like-minded companies to share their ideas. The unique partnership between a superfood company and a health brand is beneficial for both parties.

More and more ‘exotic’ fruits and vegetables are getting added to the superfoods list. The coffee fruit is the latest to join the superfood list 2021.

The coffee fruit is, simply put, the outer layer of the coffee bean. This outer layer that used to be boorishly discarded has found its awakening.

While there is a possibility that it does serve potential health benefits, scientists are not sure how much coffee fruit one can consume in a day.  However, producers of the coffee fruit have listed out its benefits over and over, focusing on the ‘antioxidants.’

For instance, Bai, an Indonesian manufacturer of the coffee fruit, markets its coffee fruits as a ‘super-secret superfruit.’ If that doesn’t gain attention, we don’t know what will.

This is not to say that these foods do not possess any favorable properties. Labeling some foods as ‘super,’ however, can undermine the health benefits of other produce.

For instance, apples, tomatoes, and carrots are full of nutrients such as fiber, beta-carotene, and flavonoid quercetin. But these foodstuffs, while being super nutritional, and readily available, they don’t cost an arm and a leg.

Instead of looking at superfoods as a cure to all health concerns, it’s best to look at them to supplement an already healthy diet. Superfoods are great, yes, but in the end, ‘real’ food may be the ultimate winner.

How did you like May Thawdar Oo’s blog post “What’s so Super About Super Foods?”? Let us know in the comments if you have anything to add, have another content idea for beauty content marketing blog posts, or just want to say “hello.” 🙂

Categories: Health and Wellness, MarketingBy May Thawdar Oo20 May 2021